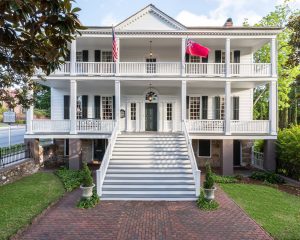 Built in 1770, the Burgwin-Wright House and Gardens is the only structure in Wilmington from the colonial era open to the public. Operated as a museum house, it offers visitors a unique opportunity to view a fine example of Georgian architecture and experience what life was like during pre-revolutionary Wilmington. All rooms are furnished with 18th and 19th century antiques and showcase hundreds of objects. Occupying an acre, the colonial style gardens consist of seven distinct areas, including an orchard with pomegranate and fig trees, a kitchen garden and a rose garden.

Constructed on the ballast stone walls of the former city jail, circa 1744, the house retains many vestiges of its previous incarnation, such as outdoor and sub-basement jail cells and a freestanding kitchen house with a massive hearth replete with period cooking utensils.  Guided tours include the stories of the people who lived and worked here, and the women’s organization that saved this landmark from the wrecking ball. The Bellamy Mansion is also near these gardens.

Copyright © 2020 MaxLiving®; Align Your Health®; 5 Essentials®. All rights reserved. This website contains proprietary logo’s and brand information of MaxLiving LP. No part of this website or information may be used, reproduced, redistributed, or published in any form without prior written permission from MaxLiving LP. All information, services, benefits or other messages may be changed by MaxLiving at any time without prior notice or explanation to the user.
Accessibility by WAH